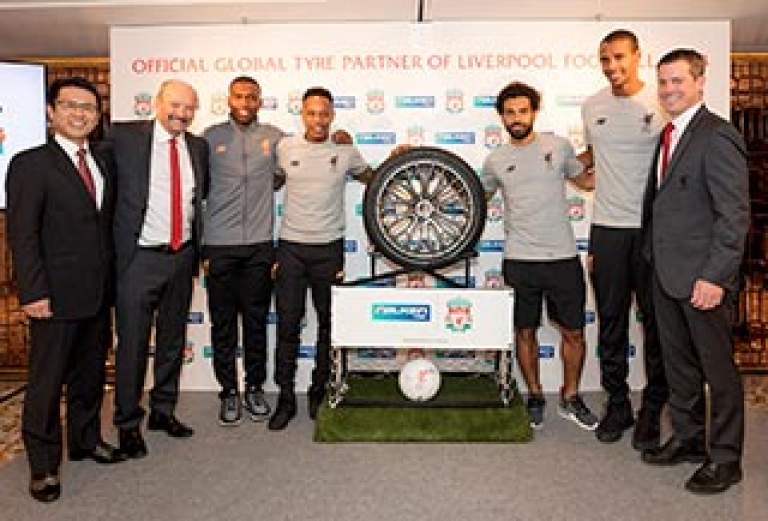 Sumitomo Rubber Industries, Ltd.(SRI) is pleased to announce their sponsorship of Liverpool FC through the FALKEN brand. The deal sees FALKEN become a Global Partner and Official Tyre partner of the Club. To launch the partnership FALKEN and Liverpool FC held a special event in Hong Kong on Monday, July 17.

The multiyear deal will see the two brands work together to create unique experiences for fans and drivers alike, while opening further growth opportunities in FALKEN's key global markets. Utilizing the world class appeal of Liverpool FC - and putting the passion of the Clubs' fans at the heart of the sponsorship, FALKEN will create innovative initiatives including exclusive content to bring the Clubs' fans closer to the action. FALKEN will also benefit from a range of marketing and promotional rights including digital and social media support, pitch side LED, stadium branding and access to Liverpool FC players and Legends.

Commenting on the partnership, Billy Hogan, Chief Commercial Officer and Managing Director at Liverpool Football Club said: "We are proud to partner with FALKEN and are pleased to welcome them to the LFC family as a global partner. FALKEN has a great synergy with the club and it shares our values in terms of attitude and performance. We very much look forward to working together on this partnership."

Satoru Yamamoto, Director and Senior Executive Officer of SRI said: "We're delighted to partner with a football club as prestigious as Liverpool FC. We both believe in an exciting future and we look forward to working together to reward and recognize our customers, as well as connecting with more fans across the world. We're also pleased to reaffirm our commitment to supporting football, as we have done before, while building on our global strategy."

Liverpool FC
Founded in 1892, Liverpool FC is one of the world's most historic and famous football clubs having won 18 League Titles, seven FA Cups, eight League Cups, five European Cups, three UEFA Cups, three European Super Cups and 15 Charity Shields.
As a socially responsible Club, Liverpool FC is proud of its heritage and plays a proactive role in its communities through its official charity, Liverpool FC Foundation. By delivering a range of award-winning programs, the Foundation motivates and inspires children and adults, both at home and overseas, using football and the power of the Liverpool FC badge. Its contribution has been recognized by the award of a Community Mark from Business In The Community.

Liverpool FC is a global brand and works with leading edge commercial partners around the world providing unparalleled commercial opportunities.

FALKEN
FALKEN is the global tire brand of SRI. The first FALKEN branded tire was introduced in 1983. Since then, FALKEN has been continually expanding the product line-up and improving the performance through the invaluable knowledge gained from decades of motorsports success. FALKEN tires are the tire of choice for those who value safety and enjoy the excitement of driving.

SRI was established in Japan in 1909, and is now the 6th* largest tire manufacturer in the world. Staying true to the pioneering spirit, the company has been at the forefront of developing cutting-edge new technologies and innovative new manufacturing processes.