BRASELTON, GA – After taking first at Formula Drift’s 2020 season finale, Team Falken’s Aurimas “Odi” Bakchis picked up right where he left off, starting Formula Drift’s 18th season with another victory at Road Atlanta. Standing next to him on the podium was teammate Matt Field, who earned second at FD’s 1st Round of the 2021 campaign. 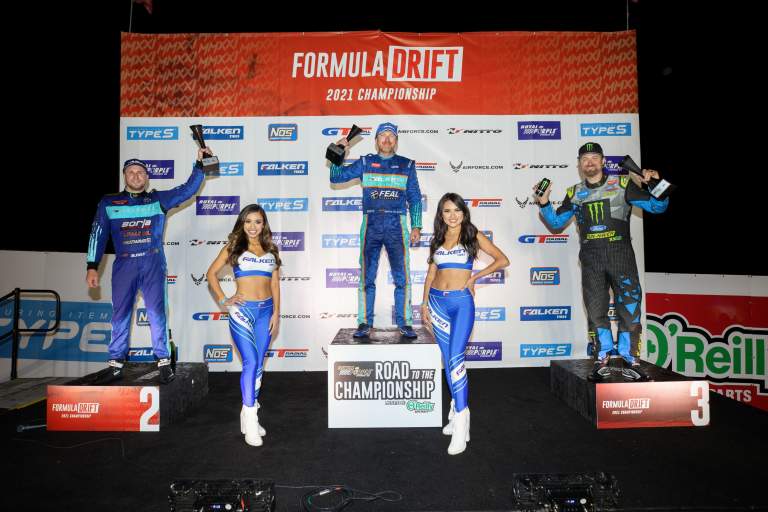 It was an all-Falken final as the last two drivers left standing, both long-time members of Team Falken, faced off for the Round 1 title 726 days removed from FD’s last spectator-filled event in Atlanta. After judges decided to have the pair run One More Time, Bakchis defeated Field to take first.

“Wow, this was just a great weekend for all of us at Team Falken,” exclaimed Bakchis, standing on top of the podium. Field qualified first; Bakchis, 3rd; Daijiro “Dai” Yoshihara, 9th; and Justin Pawlak, 25th.

“It was so great to come out swinging,” Bakchis continued, “and set the tone and get the momentum to chase the championship. Three of us advanced to the Top 16 and then Matt and I ended up in the final. It’s always tough to compete against a teammate, but it’s something we’re always thinking about. We train together, we share a lot of data, and obviously we’re on the same tires: the Azenis RT615K+. So we saved it for the finals – the so-called “Frenemies battle” – and gave the fans a real show,” added Bakchis. “It was an awesome moment and so great to come out winning with people back in the stands!”

“After starting the weekend in disbelief, qualifying number one, my goal was to just drive consistently,” added Field. “As the sun went down, we dropped tire pressures, and our Falkens were simply hooked up. Finishing the weekend competing against Odi and taking second, I couldn’t be more pumped. Now it’s on to Orlando.”

With 32 qualified entries for Round 1, Formula Drift organizers introduced a new knockout qualifying format, with the top 24 vehicles seeded by their first qualifying run. The bottom eight vehicles earned their place by entering a “last-chance qualifier” to fill positions 25 to 32.

Eight rounds are scheduled for the 2021 season, ending with two in Falken’s home state of California. Round 7 in Long Beach, September 17-18, will take place in conjunction with the rescheduled IndyCar weekend, and the finale is set for October 22-23 at Irwindale’s “House of Drift.”

“It’s great to be back to both a full season and performing in front of a packed audience,” declared Steve Wong, Falken’s Supervisor, Passenger Car Motorsports & Events. “Road Atlanta was sold out, and we anticipate all events will draw big crowds this year. Formula Drift is an incredible sport and obviously, Team Falken is right where we want to be at the start of this new season with a first and second place finish. That will be our goal all year long.”